[There is no content on recursion explicitly on the MAT syllabus, but candidates are expected to be able to adapt their knowledge of sequences and series to more complex situations.]

Poets use rhyme schemes to describe which lines of a poem rhyme.  Each line is denoted by a letter of the alphabet, with the same letter given to two lines that rhyme.

More precisely, the first line of the poem is given the letter A.  If a subsequent line rhymes with an earlier line, it is given the same letter; otherwise, it is given the first unused letter.  (For the purposes of this question, you can assume that we have an infinite supply of "letters'', not just the 26 letters of the alphabet.)

The purpose of this question is to investigate how many different rhyme schemes there are for poems of $n$ lines.  We write $r_n$ for this number.

Let $c_{n,k}$ denote the number of rhyme schemes for poems of length $n$ that use exactly $k$ different symbols. For example $c_{3,2} = 3$ corresponding to the rhyming schemes AAB, ABA and ABB.

In part (v), we're looking for an explicit formula in terms of $n$, not in terms of other values of $c_{n,k}$, so we'll need to do some work to simplify things, justifying our work as we go. We might use the recurrence relation from part (iii), or we might choose to count the rhyme schemes directly.

An $n$-fan consists of a row of $n$ points, the tips, in a straight line, together with another point, the hub, that is not on the line. The $n$ tips are joined to each other and to the hub with line segments. For example, the left-hand picture here shows a 6-fan,

For a given $n$-fan, an $n$-span is a subset containing all $n+1$ points and $n$ of the line segments, chosen so that all the points are connected together, with a unique path between any two points.  The right-hand picture shows one of many 6-spans obtained from the given 6-fan; in this 6-span, the tips are in groups of 3, 1 and 2, with the top group containing 3 tips.

(iii) By considering the possible sizes of the top group of tips and how the group is connected to the hub, calculate the number of 4-spans.

(v) Use this relationship to calculate $z_6$.

In part (iv) we're asked to expand the reasoning in part (iii) from 4-spans to $n$-spans. The phrasing ``in terms of $z_k$, where $1\leq k \leq n$ means that our expression can involve all previous values of $z_k$, possibly combined together in a complicated way!

A previous session of the Oxford MAT Livestream was on sequences and series, looking at more expressions that are like $a_n=f(a_{n-1})$.

This sequence comes up in lots of different problems: here's one!

Consider splitting a regular $(n+2)$-sided polygon into $n$ triangles by connecting corners of the polygon (perhaps you're trying to demonstrate to someone that the sum of the internal angles of the polygon is $180^\circ n$). How many ways are there to do that?

Here's a heptagon to demonstrate. 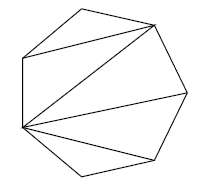 Look at the left edge of the heptagon. That edge must be part of a triangle (because the heptagon is split into triangles), and that triangle has corners at the endpoints of the edge. We can consider separate cases for where the other corner is (it must be one of the other five corners)