These are the solutions for the Recursion worksheet.

(i) We've got to start with A, and then we can have another A or go to B. In the first case, we can follow that with another A or switch to B for the third letter. In the second case, we can go back to A, use another B, or introduce C. So the five possibilities are AAA, AAB, ABA, ABB, ABC.

(iii) We're working out \(c_{n,k}\) which is the number of rhyme schemes for a poem with \(n\) lines using exactly \(k\) letters. We're asked to think about the last line, so let's consider the possible cases. We've got to use \(k\) letters, and maybe this last line is the first and only time we used the \(k^\text{th}\) letter. If that's the case then the previous bit of poem didn't use that letter (that's a ``smaller" problem with fewer lines and fewer letters). What if, instead, the last letter is a repeat? Well, that case has several different possibilities, depending on how many letters we've previously used; that's how many options there are for the last letter in this case.

(i) There's a lot to think about and understand before we can get started with this. The definition of a 2-span involve a 2-fan, so let's think about that first. That consists of two points in a line, with a hub off to one side. I'll draw mine like the ones in the question.

(ii) I'm not told how many 3-spans there are. Let's draw a 3-fan first just to think about what we're taking subsets of. 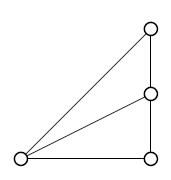 (iii) The top group of tips could include all four of the tips, or just three, or two, or one. In the first case, the points are all connected together, and there's exactly one line left to connect this group to the hub. This could be connected to any one of the four tips.

In the second case, there's a group of three at the top. The other tip must be connected to the hub (not to this group, otherwise it would be a group of four tips), and then there are three choices for how we connect the group of 3 to the hub.

In the third case, the top group has two tips. We can't connect the next tip to this group (otherwise it would be a group of three) so this group must connect to the hub somehow. There are two ways we could do that; join the top tip to the hub or join the second tip to the hub. But not both, otherwise there would be a complete triangle at the top, and there would be more than one path between the top tip and the hub. Separately, we've got to use two more lines to connect the other two tips to the hub... and that's precisely the problem of drawing all the possible 2-spans! We know there are three ways to do that, so overall in this case we've got six possibilities. 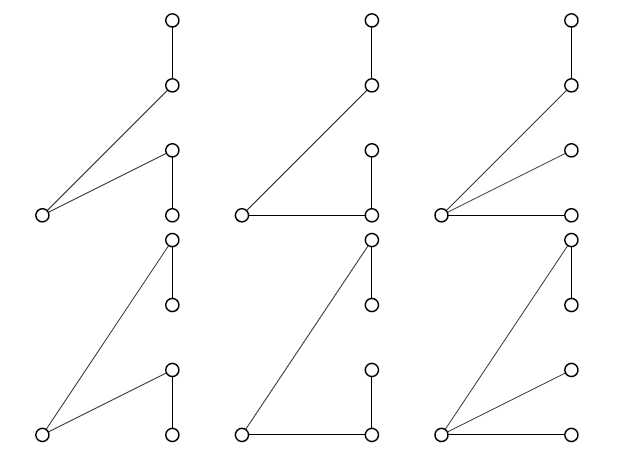 Finally, if the top group is just one tip then we must connect it to the hub and use three lines to connect the other three tips to the hub. That's the same as constructing all the possible 3-spans down here, so there are eight possibilities. 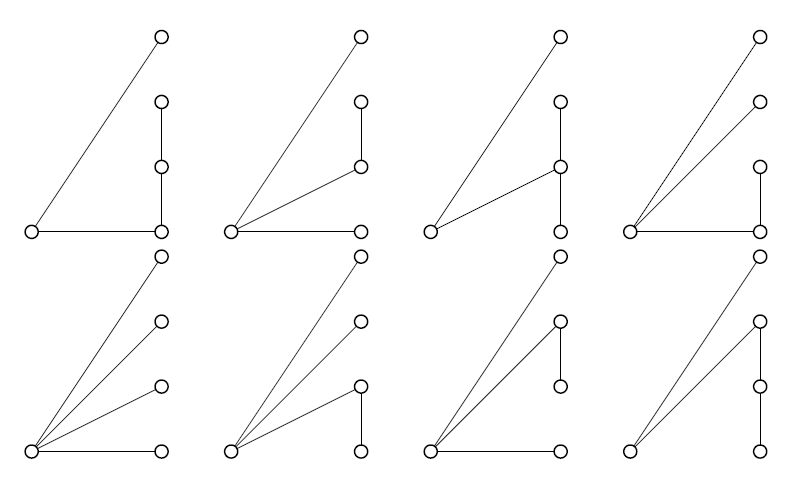 (iv) Thinking in the same way as in part (iii), we can look at different cases for the size of the top group. If \(i\) tips are in that top group, then there are \(i\) choices of how that group is connected to the hub (it must be connected to the hub, not the next tip down, and connected to exactly one of the tips so that there's a unique path from the hub to any tip). Then we've reduced the problem to thinking about how to connect the other \(n-i\) tips to the hub, and the number of ways to do this is \(z_{n-i}\). Just like in part (iii), we can make the choice for how to join the top group separately from the choice of which \((n-i)\)-span to use, and we should consider all the possibilities for how large the top group is, with \(1\leq i \leq n\).