An e-mail addressed to it-support@maths.ox.ac.uk gets sent to all the IT team as well as the request tracking system (several other addresses also generate tickets, e.g. for account extensions or security updates etc). The IT team then deal with the tickets and monitor the progress using the RT request tracking system. The IT team have run a ticket request system since August 1996. The current system from which the statistics below are compiled came into service on 8/11/2005.

Note there is also a webform to send a help request in which may be useful if you have a problem with your email but have a working web browser.

Whose ticket is it anyway?

When a request arrives, the IT Support team read the message and try to resolve it as soon as possible.

Typically an IT support person takes the request ticket so it is owned by him/her. This helps the IT team members to know who is dealing with the problem and ensure that two people don't effectively try to fix the same issue.

If it turns out that another IT Support team person's expertise is more matched to the ticket, the other member may steal the ticket or it may be given to the other person by the owner.

In some cases the information provided by the individual may be unclear or insufficient in which case someone will respond asking for more information but may choose not to take the ticket at this stage as they may not ultimately be the best person to deal with the issue.

In some cases a ticket is trivially resolved, the problem fixes itself, people forget to take ownership of the ticket or several members of the team work on the ticket collectively. In these cases the ticket often ultimately ends up being flagged as owned by no particular person, i.e. nobody.

Each request initially has status new when it has been logged and changes to open when some action has been taken by one of the IT support team (e.g. a response to ask for more info or an internal comment to update the ticket that is not sent to the requester). The request becomes resolved when a solution has been found (or on rare occasions when the problem has miraculously healed itself). If the problem cannot be solved without any external stimuli, or the problem is waiting for an event, then the request is considered stalled. e.g. A machine has crashed for no reason and upon looking at the machine, there appears no apparent problem, the computing officer then needs to find out the cause of this, and would only be able to discover it when the machine crashes again. This may not happen for many days, or even months, so the ticket becomes stalled until the machine crashes again.

Below are some statistics extracted from the request tracking system. Extracting and constructing precise statistics can be difficult. The plots and tables below should primarily be looked at for trends or patterns and overall team performance rather than trying to read anything specific into a particular number, line or table row. In particular whilst all the IT team deal with some request tickets different individuals have different skills or focus within the team and thus may typically deal with different types of tickets that in turn have differing associated issues that may skew a given statistic. Furthermore, the statistics below are only concerned with the ticket request system, some team members will be heavily involved with resolving requests and user support whilst others may equally be more involved in other key task for which no statistics are recorded, e.g. the regular rollout of new desktops, system and equipment maintenance, repair and development, face to face support etc.

Overall Summary back to August 1996

Percentage of requests resolved in a given time 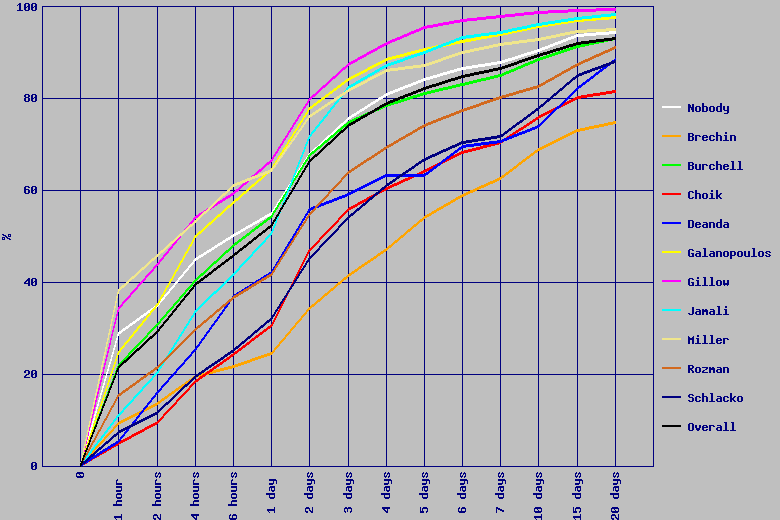 Note: Some tickets can be very slow to resolve, e.g. the issue reported may be an open problem/bug for which the only solution is to wait for a fix from the supplier/maintainer etc, equally a ticket may have been created for a long term project or other internal IT team task than is non urgent but should not be forgotten. 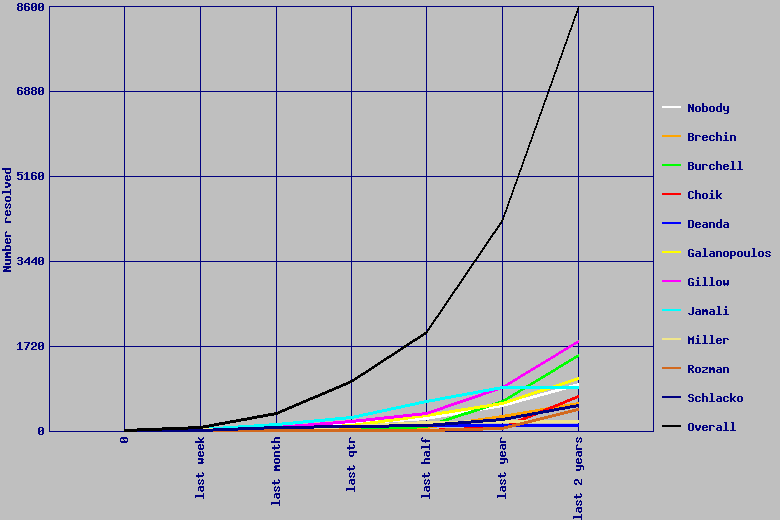 Average number of working days to resolve requests by period 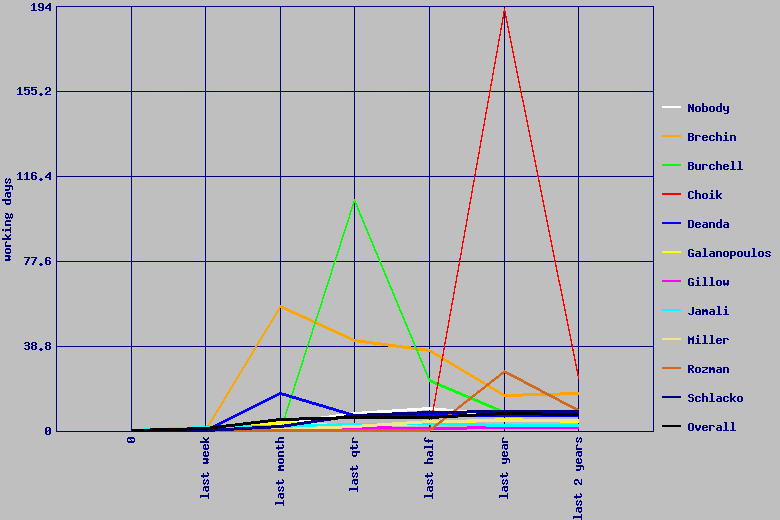 Requests resolved by period (with average days to resolve in brackets)