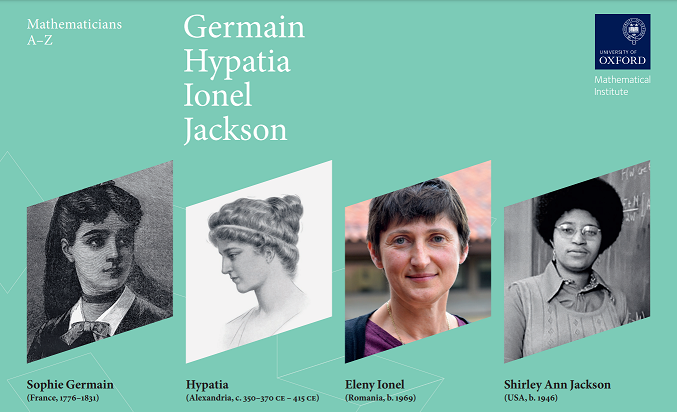 This poster series presents the life and work of 26 female & non-binary mathematicians, ordered alphabetically, who hail from backgrounds that are historically under-represented (or even prejudiced against) in the field but who nevertheless achieved great distinction, either within their own time or in recent years. Here we showcase their contributions to mathematics and its applications to the natural sciences. In doing so, we aim to bring more recognition to their accomplishments and inspire reflection on what it means to be a mathematician in contemporary society.

You can download PDFs of the posters with the links below:

G H Hardy (1877-1947) was the most important British pure mathematician of the first half of the 20th century. This set of 6 posters takes us on a journey through his time at Oxford - from his appointment as Savilian Professor of Geometry to his lobbying for a Mathematical Institute.

John Wallis (1616–1703) was Oxford’s Savilian Professor of Geometry from 1649 to 1703 and was the most influential English mathematician before the rise of Isaac Newton. In Oxford you can see the Sheldonian Theatre - an amazing building designed by Christopher Wren with a roof span of over 21m. There were no trees long enough to have simple beams supporting this roof, but John Wallis devised a clever interlocking beam structure which still survives to this day. Developing this structure involved solving 25 simultaneous equations!

If Charles Dodgson (1832–1898) (also known as Lewis Carroll) had not written Alice’s Adventures in Wonderland and Through the Looking-Glass, he’d probably be remembered as a pioneer photographer. But his Oxford ‘day job’ was as Lecturer in Mathematics at Christ Church. Dodgson had interests in geometry and algebra, but he also made influential contributions to logic and voting theory; he made recommendations to parliament, including the rule that no results should be announced until all polling stations had closed.

What was mathematics like in Victorian Oxford? The Savilian Professor of Geometry was established in 1619 by Sir Henry Savile, and has been held by many top mathematicians - including John Wallis (who introduced the \(\infty\) notation), Edmond Halley (after whom Halley's comet is named), Edward Titchmarsh, and Sir Michael Atiyah. The current holder of the chair is Frances Kirwan. Throughout the Victorian era three Savilian Professors of Geometry left their mark on Mathematics at Oxford: Baden Powel, Henry Smith, and James Sylvester. These posters tell their story. The Oxford Mathematics Alphabet is an outreach project showcasing the amazing and wonderful research going on at the Mathematical Institute at the University of Oxford. Each letter links to an area of research, a blog post written by a researcher in the area, and an A3 poster for download.

A World History of Mathematics

Much of the mathematics that is done throughout the world today is essentially European in style. This is a legacy of European colonialism, which saw the export around the globe of a specific approach to mathematics: one derived from the ideas of the ancient Greeks, and based firmly on the notion of proof.

Until recent decades, the study of the history of mathematics has tended to focus on the history of this European mathematics and on the works of the 'great' white European men. However, other parts of the world have had, and continue to have, their own mathematical traditions, though in many cases little record remains of the individuals who were involved in these developments.

A series of new posters, to be displayed in the mezzanine of the Andrew Wiles Building and online, aims to provide a taste of the different types of mathematics that have appeared throughout the world, and to show that these are as much a part of the story of mathematics as the tales that are traditionally told of the prominent European mathematicians.