The 2020 Nobel Prize for Physics has been awarded to Roger Penrose, Reinhard Genzel and Andrea Ghez for their work on black holes. Oxford Mathematician Penrose is cited “for the discovery that black hole formation is a robust prediction of the general theory of relativity.”

Mike Giles, Head of the Mathematical Institute in Oxford, said "We are absolutely delighted for Roger - it is a wonderful recognition of his ground-breaking contributions to mathematical physics."

Roger himself said: "It is a huge honour to receive this Prize. In 1964 the existence of Black Holes was not properly appreciated. Since then they have become of increased importance in our understanding of the Universe and I believe this could increase in unexpected ways in the future."

Sir Roger Penrose is famous for his many contributions to the mathematical physics of general relativity and cosmology. In 1965 with his ground-breaking paper "Gravitational Collapse and Space-Time Singularities" he predicted the existence of black holes, astronomical objects so dense that the geometry of space-time becomes singular inside them and not even light can escape their gravitational attraction. This remains, to this day, one of the most astonishing consequences of Einstein's theory of General Relativity, and we now see that they do exist in nature.

Roger also pioneered the development of the mathematical theory that describes the structure of space-time and, together with Stephen Hawking, he developed singularity theorems that form the basis of the modern theory of black holes.  In parallel, he developed twistor theory as an approach to the quantization of space-time and gravity. It has since become a powerful tool across mathematics and has more recently impacted on physics in the form of 'twistor-string theory' as a tool for calculating scattering amplitudes for collider experiments. It is still actively pursued as an approach to quantum gravity.

He has made many other scientific contributions that, despite their recreational origin, have nevertheless had Nobel prize winning impact.  His quasi-periodic tilings have a crystallographically forbidden 5-fold symmetry. These have not only inspired much mathematical research, but were subsequently discovered by Schechtman in 1984 to be realised in quasi-crystals that can be made in the laboratory. Roger Penrose, together with his father, was the originator of Escher's famous and iconic impossible pictures. His theory of spin networks in his Adam's prize essay has become one of the pillars of 'loop quantum gravity' and now has a worldwide following. Amongst his most cited papers is the theory of generalised inverses of matrices that have applications from statistics through to engineering.

Another particularly influential strand has been his work on the foundations of quantum mechanics, both on realistic models of wave function collapse, and on time asymmetry therein and its relation to that in thermodynamics and in the big bang versus gravitational collapse. His early work in the ‘70s and ‘80s laid the foundations of what is now a worldwide endeavour.

Last, but not least, his books on popular science have provided a benchmark for how to engage with the layperson without trivialising the science.

Below are pictures from the Swedish Embassy in London where Roger was presented with his Nobel medal and diploma by the Swedish Ambassador on 8 December 2020.

In 2018 Roger Penrose gave an Oxford Mathematics Public Lecture where he outlined his latest thinking on Cosmology and in an interview with Hannah Fry talked about his career and how he wasn't always so far ahead of the game, especially when it came to arithmetic. The video is below the pictures. 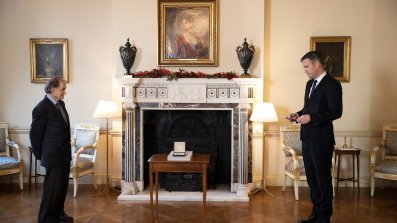 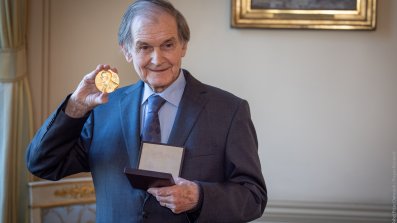 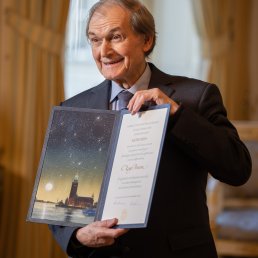