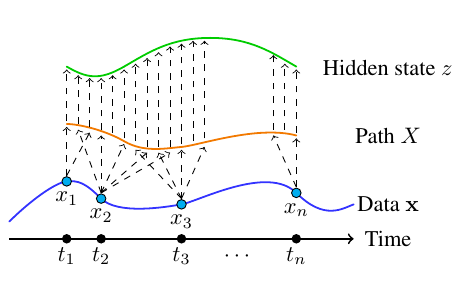 Oxford Mathematician Patrick Kidger writes about combining the mathematics of differential equations with the machine learning of neural networks to produce cutting-edge models for time series.

What is a neural differential equation?

Differential equations and neural networks are two dominant modelling paradigms, ubiquitous throughout science and technology respectively. Differential equations have been used for centuries to model widespread phenomena from the motion of a pendulum to the spread of a disease through a population. Meanwhile, over the past decade, neural networks have swept the globe as a means of tackling diverse tasks such as image recognition and natural language processing.

This is called a neural ordinary differential equation. At first glance one may be forgiven for believing this is an awkward hybridisation: a chimera of two very different approaches. It is not so!

Fitting parameterised differential equations to data has long been a cornerstone of mathematical modelling. The only difference now is that the parameterisation of the right hand side (the $f_\theta$) is a neural network learnt from data, rather than a theoretical one...derived from data (via the human designing it).

Neural differential equations have applications to both deep learning and traditional mathematical modelling. They offer memory efficiency, the ability to handle irregular data, strong priors on model space, high capacity function approximation, and draw on a deep well of theory on both sides.

Against this backdrop, we consider the specific problem of modelling functions of time series. For example, we might observe a sequence of observations representing the vital signs of a patient in a hospital (heart rate, laboratory measurements, and so on). Is the patient healthy or not? We would like to build a model that determines this automatically. (Perhaps to automatically and rapidly alert a doctor if something seems amiss.)

Of course, there's a few ways of accomplishing this. In line with the theme of this article, the one we're going to introduce is a model of the following form:

If you're not familiar with this notation, then just pretend you can "divide by $\mathrm{d}t$" (or $\mathrm{d}X(t)$) and you get the equation we had earlier. Check out the paper [1] for a less hand-wavy explanation of what's really going on here.

Changes in $X$ will create changes in $z$. By training this model (picking a good $f_\theta$), we can arrange it so that if something happens in $X$ - for example a patient's health starts deteriorating - then we can produce a desired change in $z$ - which can be used to call a doctor.

Neural controlled differential equations are actually the continuous-time limit of recurrent neural networks. (Which would often be the typical way to approach this problem.) By pushing to the continuous-time limit we can get improved memory efficiency, can more easily handle irregular data... and also produce something theoretically beautiful! In keeping with what we argued earlier, it seems that recurrent neural networks often work because they look like neural controlled differential equations. Indeed the two most popular types of recurrent neural networks - GRUs and LSTMs - are explicitly designed to have features that make them look like differential equations. Not a coincidence! Understanding these relations will help us build better and better models as we go into the future.