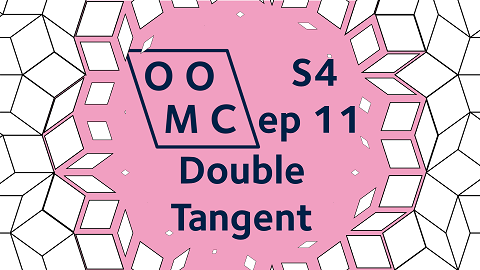 Can you find a line that's tangent to a given quartic in two different places? In this episode we give it a go. There's also a brief mention of a cool extension to the satellite-shadow problem from last week.

The main idea of the faster method in the livestream was to subtract a line and work with the resulting function. We relied on the idea that after this transformation, we would still have a line that was tangent to the function. Let’s explore why that works and see if we can generalise the idea.
Let’s call the original function $f(x)$ and the line that’s tangent $y=g(x)$. In the problem in the livestream, we know an expression for each of these, but let’s keep it general for now. We know that there’s a point $x_0$ where the line is tangent to $f(x)$ (actually two different points, but let’s look at them one at a time). So we know that the value matches $f(x_0)=g(x_0)$ and the gradient matches $f’(x_0)=g’(x_0)$. These happen to be the two equations that some people in the live chat wanted to go and solve. Let’s see what happens if we subtract a function $h(x)$ from both $f(x)$ and $g(x)$. Now in the livestream, we chose $h(x)=g(x)$ and we subtracted the line, but let’s stay general here and use $h(x)$. After subtracting, the value of $f(x)-h(x)$ at $x_0$ is $f(x_0)-h(x_0)$, and that agrees with the value of the other function $g(x_0)-h(x_0)$. We can also compare the gradients; $f’(x_0)-h’(x_0)=g’(x_0)-h’(x_0)$ so the gradients still match.

This is great news, because if we choose $h(x)=g(x)$ then we now have a function $f(x)-h(x)$ which we know has value zero and gradient zero at $x_0$; that’s powerful knowledge.

Even better, treating this generally shows that we can subtract any function, not just a line.

In the livestream we avoided solving for $x_1$ and $x_2$. You might like to complete the calculation by solving a quadratic for those points of tangency. You should find that this quadratic only has real roots in some situations; this is how you can work out whether or not a quartic has a double tangent or not.

If the points $x_1$ and $x_2$ aren’t real, then perhaps we could use complex numbers to explain where they are. Imagining this would probably require us to imagine complex input and output for our quartic, which seems difficult. I’m not sure how to make sense of that, so that’s left as an exercise for the reader!

Tangent in more than two places

You might like to explore what the curve $y=x+(x-1)^2(x-2)^2(x-3)^2$ looks like (can you describe how it interacts with the line $y=x$ before you plot it?). Can you make a Desmos version that does something similar but more general?

These were mentioned in passing on the livestream because we had two sliders that were oscillating, and I wanted to try to describe how the values of those two sliders moved through the "phase-space" of possible values for the pair of sliders.

Unfortunately, the Desmos sliders don’t actually change like sine and cosine functions, they change linearly, so the motion you get from the default Desmos sliders isn’t a Lissajous curve. Instead, it’s more like a DVD screensaver, if that means anything to you (https://www.desmos.com/calculator/i5pserltov). We can make it more Lissajous-like by adding in some cosines (https://www.desmos.com/calculator/bitudpec9l). You might like to experiment with custom speeds (by changing the factor of 1.5 inside the second cosine, for example). If you do this, then you might want to change the range of the sliders for $a$ and $b$ to make sure you're exploring all the possible motion.

Explore: What happens if the ratio of the speeds is an irrational number?