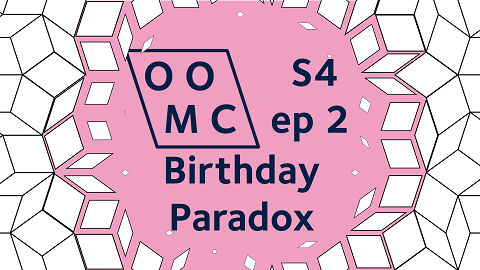 What's the probability that two people from a group of $n$ people have the same birthday? In this episode, we find out!

What I didn’t see coming though, was that we had three people claim to have the same birthday. I’ve run the numbers over the weekend, and I think that there was only about a 5% chance for that to happen, so maybe I was right to be slightly sceptical during the live show.

We talked about the fact that if you have 23 people in a room, there’s a 50% chance that two people have the same birthday. Because someone asked for it, here’s a fact with 99% in it! If there are 57 people in a room, then there’s a 99% probability that two have the same birthday. \to get to that fact, I calculated some values of the formula from the livestream.

On the livestream we came up with the “homework” problem to sketch $y=e^{-x(x-1)}$. I should probably have recognised this curve-sketching problem when I set it, because it’s quite a normal graph. If you found that too easy, try sketching $y=e^{-x(x-1)(x-2)}$. Check your answer with desmos.

Two weeks ago the further reading talked about having a binary check digit for error detection. This week we mentioned hash functions on the livestream, and it’s a related idea; calculate something based on the data, and then later someone else can come and check whether the data’s been altered by checking that the calculation still gives the same answer.

The birthday attack that I mentioned is to do with the way that it’s surprisingly easy to find a pair within random data. So if you’re calculating these hash functions for lots of different data sets then it’s not too hard to find a pair that give the same output. This is a bit of a problem because then I can switch between the pair, and that switching is undetectable.

This blog post on hash functions gives an introduction to the ideas.

Exercise: Investigate what happens if there are three days in the year instead of two, but still just two people in the group. What’s the chance that those two people share a birthday?

Exercise: Investigate what happens if there are three people in the group.