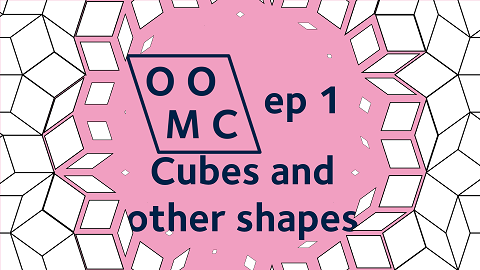 In episode 1, we talk about shapes and about watching YouTube videos quickly, and answer some of your questions.

Cubes and other shapes

You can download a net of a cube with instructions for designing a symmetric pattern here;

Cubes and other shapes. There are two rules- the first gives the correct symmetries, and the second is more of a guideline about getting your design to match up along the edges.
Rules:

We discussed the challenge of making models of all the Platonic solids and all the Archimedean solids.

I mentioned arithmetic and geometric series- here’s an interactive Mathigon article with a nice introduction, in case that’s the first time you’ve heard of them https://mathigon.org/course/sequences/arithmetic-geometric

We talked about the way that the sum of terms of a geometric series converges. Loosely speaking, the word “converges” means “gets closer and closer to a finite number”. I thought I’d use this space to show you the technical definition we teach at university, and to break it down a bit. The technical definition is something like this;

This is much more technical than anything you’ll see at A-level; I’m including this here as a sort of preview of what university-level sequences and series content looks like (we call this Analysis at university). It can almost feel like decoding a complicated legal agreement sometimes, as you try to pick apart all the nested terms and conditions in a statement like this. Let’s try and unpack it a bit, starting from the middle and working out.

At the heart of this condition, there’s a statement about “the sum of the first $n$ terms”- that’s interesting, because it means that we’re just looking at the sum of finitely many terms. That’s actually nicer to imagine than the sum of infinitely many things. Good start.
Reading on, we see “differs from $S$ by at most a”. Problem here; I’ve started from the middle so I don’t know what $S$ and $a$ are supposed to be. $S$ is also mentioned at the start and the end- $S$ is going to turn out to be the number that our infinite sum converges to (and there’s a condition at the front in case no such $S$ exists, if our series doesn’t converge).

The other mention of a in this condition is “such that for every $a>0$”. This is a pretty strict requirement; our sum has to obey a condition for all positive numbers. Since we want the sum to differ from $S$ by at most $a$, this is going to be stricter for small $a$ (and the set $a>0$ includes some very very small values of a indeed!)

OK, let’s look at what we’re supposed to do for all $a>0$. “there exists an $N$ such that for $n>N$”. OK, this says that we can get away with our first few terms not obeying the core condition (sum differs from $S$ by at most $a$), but at some point we’ve got to guarantee that the sum of the first $n$ terms will now behave forever, for all future values of $n$. In words, this means something like “eventually”.

Putting it all together, we get a statement like “your infinite sum converges to $S$ if (given any value of $a$) the sum of the first $n$ terms eventually stays within a of $S$”.

That statement in words isn’t perfect, because it doesn’t quite capture the way that “eventually” is allowed to mean different things for different values of $a$. As always, there’s a fine balance between having an intuitive statement that lets you have ideas and spot patterns, and having a strong technical definition that lets you actually prove things.

This sort of activity is something that maths students have to do quite a bit; not just memorise the technical definition, but also build some sort of understanding for what it means, so that they can spot when the definition might hold, or maybe to get some ideas about how to prove it for a particular sum.

Two last points; this sort of condition “for all $a>0$, stuff” comes up a lot in Analysis, and also mathematicians traditionally use the Greek letter epsilon, $\epsilon$, instead of $a$, but I didn’t want to try including that here.

https://mathworld.wolfram.com/ConvergentSeries.html
Overview of the Oxford first-year course on this material; https://courses.maths.ox.ac.uk/node/43846

Includes some lecture notes https://courses.maths.ox.ac.uk/node/view_material/43860 (Just for your interest. Do not read all of this, it’s really hard work!)