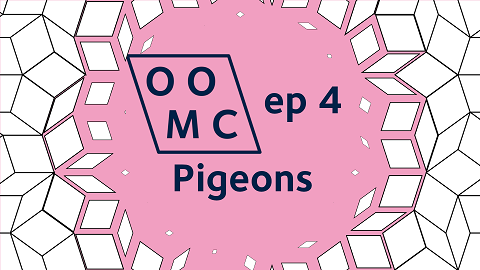 In episode 4, all the problems involve pigeons. James is joined by current student Christian to explain.

Here’s a clear statement of the pigeonhole principle;

“If there are $m$ pigeons in $n$ pigeonholes, with $m\geq kn+1$, then at least one pigeonhole contains at least $k+1$ pigeons”.

The homework problem that we didn’t answer on the livestream is as follows;

“If nine points are placed in a square of side length 2, prove that there are three of them which form a triangle of area ½ or less, or find an example where this isn’t the case”.

On the livestream, I couldn’t spell the word “associativity” which might have stopped you from looking it up. It’s a property that a “binary operation” might have. A binary operation is something that takes two inputs and gives one output (like adding numbers together, or finding the average of two numbers, or raising the first number to the power of the second number). Some of these satisfy $x*(y*z)=(x*y)*z$, where $*$ is a sort of placeholder symbol to represent your binary operation (you could imagine putting a + there, for example).

Associativity is one of the four properties that you need to satisfy in order for your binary operation and set together to be a “group”, https://mathworld.wolfram.com/Group.html.

I briefly mentioned a different problem that derives Snell’s Law. This one needs a bit of calculus, so ignore it for now if you haven’t seen the chain rule yet.

Suppose you’re on a beach with a straight boundary between the sand and the sea. If you want to get from a point on the beach to a point in the sea, then you need to run on the sand a bit, and then swim in the sea a bit. We’re going to think about where you should get into the sea.

Suppose you’re 10m away from the sand/sea boundary, and you see someone in trouble at a fixed point 10m out to sea, and 20m down the shoreline. You can run at speed 10 m/s, and you can swim at speed 2 m/s. You plan to do something like this (not a straight line because you want to exploit your superior running speed). 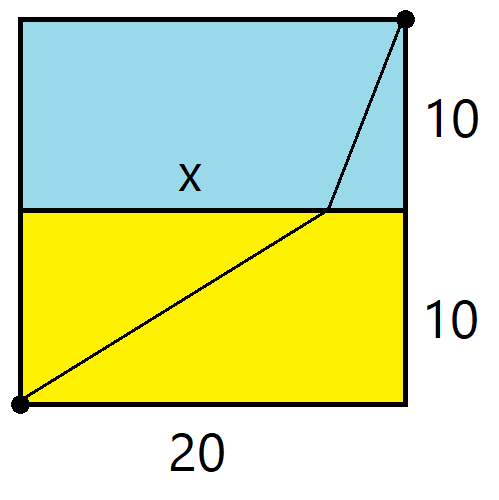 Use geometry to work out how long it takes you to get to the person in trouble, in terms of $x$, the distance along the beach where you get into the sea. Use calculus to find an equation that the distance $x$ satisfies when this function is minimised. Interpret this equation in terms of angles at the point where you get in the sea. Compare with Snell’s Law https://en.wikipedia.org/wiki/Snell%27s_law.