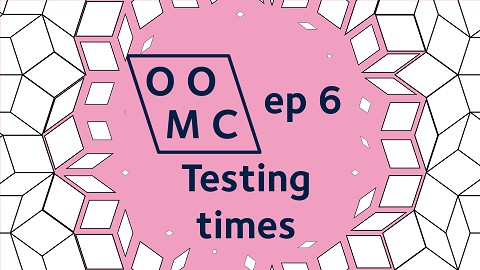 In episode 6, Oxford DPhil student Zheneng joins us to explain hypothesis testing, and we finish some curve sketching from the previous episode.

Something I wanted to talk about on the livestream is an effect called “optional stopping”. It happens when you do something multiple times, but rather than stopping after a certain fixed number of trials, you stop once some condition has been met. This can have an effect on statistics calculated from your results. Here’s an example of what I mean.
Question: Suppose I roll a fair die until you get a 6, then stop, and then work out the proportion of rolls that are 6. What do we expect this number to be?
Answer: Let’s make a table of what might happen.

So in conclusion, if you roll a fair die until you get a six and then stop, then I expect more than a sixth of your dice rolls to be six. This is a sort of counter-intuitive property of expectation; formally, mathematicians write things like
$$ \text{In general,}\quad \mathbb{E}\left(\frac{1}{X}\right)\neq \frac{1}{\mathbb{E}(X)}.$$
To be really clear about why this is counter-intuitive; I expect you to roll the die six times, and I expect (I know!) that you’ll have exactly one six. But I expect more than one-sixth of your rolls to be six!
Exercise: Check that, for the problem above, the expected number of dice rolls is 6.
Exercise: Suppose I roll a fair die until I get two sixes (not necessarily in a row). Find the expected number of rolls, and find the expected “proportion of rolls that are six” (this last calculation needs a trick like the one above!).

Here’s the add break problem again (with a clarification about positive numbers). On the livestream, we talked about solutions to the first three parts, but I don’t think I saw anyone solve (and prove) the last part.

If you solve the last part, let us know on oomc [at] maths.ox.ac.uk and we might feature your solution on the livestream!

The suspiciously-successful Minecraft speedruns were submitted to mcspeedrun.com. You can find their original report here; https://mcspeedrun.com/dream.pdf . That document goes into plenty of extra detail and brings in lots of high-powered statistical techniques that don’t change the final answer much.

People seemed to like the curve sketching, so here are a couple more.

One of these is related to a spring. The other is just a nice graph that I like!