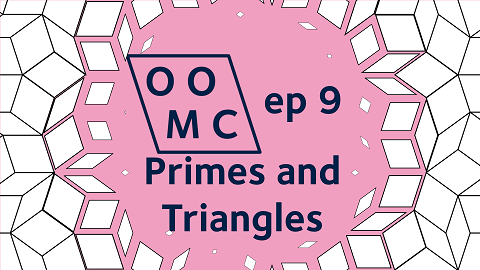 In episode 9, James proves Wilson's Theorem and does some tricks with a triangle.

The key idea in the proof of Wilson’s Theorem was the idea that we could cancel certain pairs mod $p$. This idea comes from abstract algebra, where we might look for “the inverse” of an object $x$. If we think about the set of whole numbers and normal multiplication, then most integers do not have an inverse in that set (for example, there’s no integer that you can multiply by 5 to get 1). What we showed in the livestream is that, with multiplication modulo p, each integer between $1$ and $(p-1)$ does have an inverse that’s also in that set. That’s completely different, and kind of exciting! Abstract algebra tries to explain general properties of sets equipped with an operation or two, only using basic properties of those operations. The abstraction here means that the results can apply to a huge range of things. Students on the Oxford mathematics course at university can learn how to use abstract algebra for geometry, analysis, differential equations, quantum mechanics, and lots more.

Here’s a fun result that we can prove now that we’ve got Wilson’s Theorem.

This is part of the theory of quadratic residues that we mentioned on the livestream back in episode 0. Oxford students have the option to learn more about this sort of thing in a second year course called Number Theory. You can see an overview of that course here; https://courses.maths.ox.ac.uk/node/50752

In the livestream, we thought about the symmetries of an equilateral triangle. You might like to think about the symmetries of a square instead. How many are there, what are they, and what happens if you do one operation followed by another one? For example, if you a reflection followed by a rotation, does that have the same effect as if you’d just done a single reflection? Can you make a table of what happens when you do one operation then another? Is there a nice way to arrange the rows and columns and colour the elements that reveals some structure in this table?

The symmetries of a triangle form a “group”. A group is just a set of things equipped with a “binary operation” (that’s the technical name for anything like $+$ or $\times$ that takes two things and returns one thing), with some rules that the binary operation must follow (just four rules, listed here if you're interested; https://mathworld.wolfram.com/Group.html)

Group theory is a sort of abstract algebra!

One of these curves is called the hyperbolic tan function. The other is related to the question “which positive integers $a$ and $b$ have $a<b$ and $a^b=b^a$?”