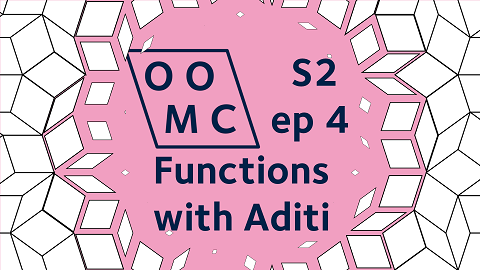 In this episode, Aditi introduces the fundamentals of differentiation and integration, as they're taught on a university Maths degree. We take a look at continuous and differentiable functions, and prove the fundamental theorem of calculus.

Continuous, differentiable or neither?

Here are some more functions. Have a go at sketching them, and decide whether they are continuous, differentiable, or neither.

We skipped a bit of the discussion of Rolle’s Theorem for time- here’s something to think about.

Discussion: The proof of this is in the first year of most university mathematics courses, and it’s not conceptually tricky, but it is a bit fiddly. Essentially, we look at the maximum and the minimum of the function and show that one or both of them have $f’(c)=0$ by thinking about the behaviour of $f(x)-f(c)$ near those points. It’s made complicated by the fact that (in general) a set of values doesn’t have to have a maximum, even if all the values are bounded below some number. For example, the set $\lbrace\frac{1}{2} , \frac{2}{3},\frac{3}{4},\frac{4}{5},\dots\rbrace$ has all its values below 1, but there isn’t a maximum “biggest” element! In the proof for Rolle’s Theorem, we use the fact that the function is continuous to prove that it actually achieves a maximum value (rather than just getting close to some upper limit).

If you’re interested in the technical details, there’s a proof of Rolle’s theorem on Wikipedia which uses the Extreme Value Theorem, which uses the Bolzano-Weierstrass theorem, which uses the Monotone Convergence Theorem. A university course in Analysis would usually cover all of these in the opposite order, so that you build from basic theorems to more advanced theorems.

Exercise: Explore why the conditions in Rolle’s Theorem are there:

But the conditions are not, strictly speaking, necessary:

On the stream, we used Rolle’s Theorem above to prove the Mean Value Theorem. Here’s a step-by-step replay!

Proof: We can’t use Rolle’s Theorem straight away on $f(x)$ because we don’t have the $f(a)=f(b)$ condition. Instead, we’ll consider the function

(Looks like magic, but Aditi explained on the livestream how this comes from the idea of rotating the graph around.)

on separate axes. Check your plots against Desmos. Do you think these functions are continuous? Are they differentiable?