Mathematics has long played a crucial role in understanding ecological dynamics in a range of ecosystems, from classical models of predators and prey to more recent models of aquatic organisms' interaction with global climate. When we think of ecosystems we usually imagine coral reefs or tropical forests; however, over the past decade a substantial effort has emerged in studying a tiny, yet deadly ecosystem: human tumours. Rather than being a single malignant mass, tumours are living and evolving ecosystems. They are composed of genetically and phenotypically heterogeneous cell populations which compete with each other and with the healthy tissue surrounding them. Researchers have been using ideas from ecology (by way of mathematics), to investigate how these interactions shape tumour initiation and evolution and how we might be able to exploit them to improve therapy response.

Where there is competition, there is also scope for cooperation. Oxford Mathematicians Maxi Strobl, Andrew Krause, and Philip Maini, along with mathematical collaborator Sandy Anderson and experimental collaborators Mehdi Damaghi and Robert Gillies from the Moffitt Cancer Centre, USA, (home to the first mathematics department in a cancer center) have recently developed an ecology-inspired model to study emergent cooperation between different kinds of tumour cells. Such a model might help explain the aggressive invasion often seen in malignant tumours. Normal (stromal) cells have many mechanisms for defending against cancer, such as directly competing against invading cells for resources, or by blocking invasion through a thick extracellular matrix. Cancer cells have been shown to be able to circumvent these mechanisms by producing acid which can kill stromal cells, and by degrading the matrix in order to move into regions of healthy tissue. These mechanisms can be represented mathematically with a system of coupled degenerate reaction-diffusion equations, and one can study travelling waves of an invading tumour to determine how invasive a particular collection of phenotypes is.

Given the range of checks and balances in place to prevent tumour growth, how come they can still fail? While invasion is traditionally thought to be driven by cancer cells able to perform both tasks described above, recent work indicates that tumours may be composed of many different kinds of cells with different traits. This suggests the possibility that different populations of cancer cells could indirectly cooperate by specializing in each of these invasion mechanisms, in order to jointly overcome the defences that normal tissue uses against these malignant invaders. The model developed suggests that invasion is fastest when these different cell populations can stably coexist, and therefore that the evolution and spatial distribution of distinct phenotypes within tumours plays a key role in the invasive potential of the tumour. Such research helps to better understand how tumour ecosystems work, and what we may want to look for in a patient’s imaging and genetic data to more accurately predict a tumour’s future evolutionary trajectory. 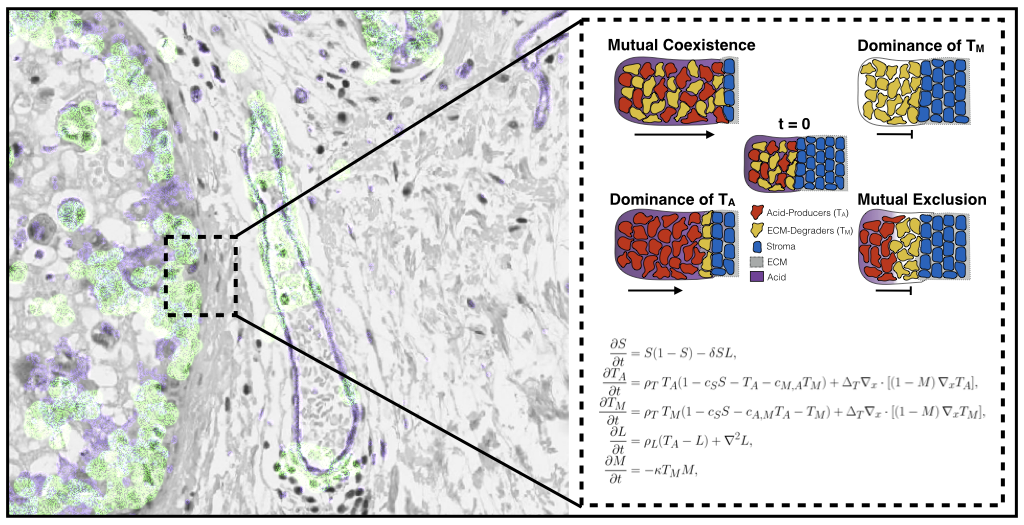 Figure above: histology of an invading tumour front alongside a diagram of plausible invasion scenarios from the mathematical model.