Oxford Mathematician Mohit Dalwadi talks about his work on the modelling of cryopreservation.

"While Captain America was able to survive being frozen for over six decades in the Marvel Universe, we are a long way from this type of technology in real-life. At the moment, people can only preserve small numbers of cells when freezing them. This technology is known as cryopreservation, and it works because metabolic processes grind to a halt at low temperatures, essentially keeping cells in suspended animation. Cryopreservation has the potential to help protect endangered species, preserve tissue for organ transplants, and improve food security.

The major challenge in cryopreservation is to ensure that cells are not damaged during the freezing or thawing processes. One source of damage is ice formation; larger, spikier ice crystals are more likely to rip the cell apart. The size and shape of ice crystals depends on how quickly you cool the mixture you are trying to freeze, and so this is one key factor that needs to be understood to improve cryopreservation protocols.

Incredibly, some cold-blooded animals are able to naturally survive being frozen. There are certain species of frogs and fish that can survive being frozen overnight. They do this by releasing sugars into their bloodstream, which act as anti-freeze and reduce the ice formation within their bodies. Humans are trying to develop technology that mimics these frogs by adding cryoprotective agents (CPA) into solutions containing cells they want to freeze. While this does help to reduce ice formation, it comes with its own problems – CPA can be toxic to cells that have not evolved to deal with it.

This means that if we want to try and freeze cells, we have to be very careful about getting the right balance of CPA addition and cooling rate – there is a delicate balance between the two. As you might imagine, it takes a lot of time and effort to determine this optimal balance through experiments. And just because something works for one type of cell, there is no guarantee that it will work for another. By developing mathematical models of these cryopreservation procedures, we can quickly evaluate their efficacy, and determine the optimal protocols for given cell characteristics.

As the solution mixture of cells and CPA is cooled, ice will form and decrease the volume of liquid in the system. This will concentrate the CPA and other solutes, causing cells to dehydrate through osmosis. To account for this mathematically, we must track the heat and mass transfer in the system, which are coupled due to the depressing effect of CPA on the freezing temperature, and account for the moving boundaries at the freezing front and the cell membrane. While these moving boundaries can be computationally challenging to simulate, we are able to systematically reduce the complexity of the model for the freezing of a single cell (e.g. a human egg) by exploiting the disparate timescales over which transport mechanisms occur.

Our analysis shows that while the temperature of the liquid settles down to a spatially uniform value over a matter of seconds, the chemical concentrations take several minutes to do the same. Moreover, we find that the motion of the moving boundaries is strongly coupled to the chemical mass transport. While the freezing front motion and the CPA concentration are both forced by the decrease in temperature, over the timescale of a few minutes the motion of the freezing front is slowed down by CPA being pushed out and building up just ahead of the advancing front. The cell membrane motion occurs over a longer timescale of many minutes, and this motion is mainly governed by the concentration difference across the cell membrane. We are able to use these results to provide predictions on what sort of CPA levels and cooling rates cryobiologists should be trying to aim for, given the cell characteristics.

Find out more about this work which was carried out with colleagues Sarah Waters, Helen Byrne and Ian Hewitt." 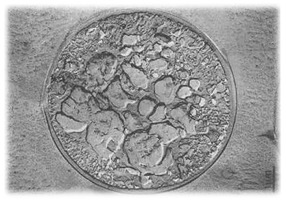 Image above: Ice forming within a cell 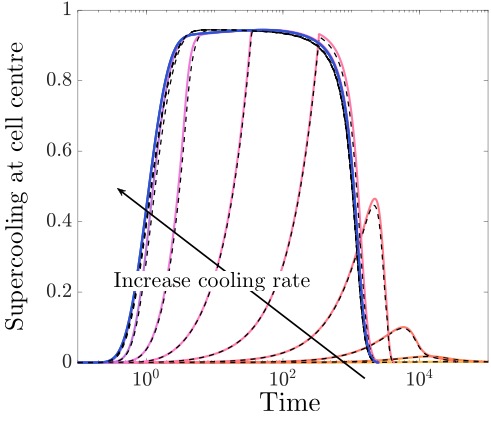 Image above: model predictions for supercooling at the cell centre over time for different cooling rates.