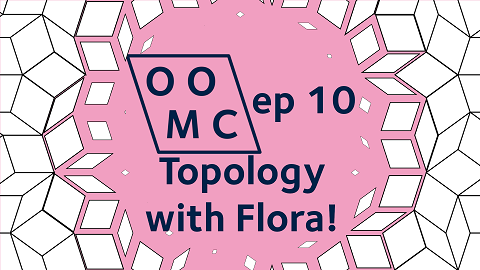 In episode 10, Flora shows us a trick with a Möbius strip that you can try at home.

Finally, here’s a link to the Wikipedia page on Quotient Spaces in Topology. This is the rigorous version of the “gluing” process that Flora described. This page is very technical (there’s a reason why this is second-year university mathematics!), but it has another good animation that’s worth having a look at.

Plus magazine reminds you of the suggested homework: make a Möbius strip yourself and cut along the halfway line, the 1/3 along line, etc. It also has an extra fun suggestion at the end!

When you’ve had a go at that, you could watch this; Topology & Geometry - Dr Tadashi Tokieda. This is a great lecture explaining what happens when you cut a Möbius strip along the halfway line, and again, and along the 1/3 along line, and why!

The books that Flora mentioned;

Here’s a tidy version of the random graphs question that James mentioned;

If you’ve got that probability in terms of $p$, you might like to try plotting it as a function of $p$. Next, you could repeat the whole calculation for five towns, or for six towns. What happens to the graph?

There’s more information about this problem for a large number of towns, and a link to a 1960 research paper, here.

This is a tricky polynomial to sketch. It’s got a factor of $x^3$, which might give you a clue about what it looks like near $x=0$. If you know the chain rule and the product rule and you’re feeling brave, you could try differentiating this and checking what’s going on at $x=1$.

This essay competition is open to anyone, and you can write about any mathematical topic you like. There are two £50 prizes (one of them is just for people aged $\leq 18$). Entries close 26 March at https://www.seh.ox.ac.uk/study/outreach/teddy-rocks-maths